Eufy Smart Lock Touch & WiFi review: The most versatile lock on the block

This sleek, Wi-Fi lock boasts biometric unlocking and a host of other features 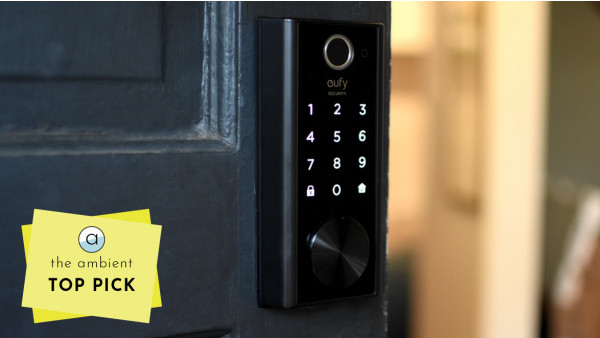 While the snappily named Eufy Smart Lock Touch & Wi-Fi is not Eufy's first skin in the door lock game, it is its best, upping the stakes from the first fingerprint model by adding a Wi-Fi radio while keeping the same launch price.

The only thing missing is auto-unlock, but with fingerprint unlock being almost as convenient (and often quicker) that's not a big miss.

Price when reviewed
$249
Buy on Amazon

Sadly, despite Eufy's reputation for quality hardware with budget prices, the Smart Touch Lock is up there with the best of them in terms of price.

But how does it compare to our top lock the August WiFi Smart Lock ($249), or another fingerprint-enabled lock the Lockly Secure Pro ($279) in terms of features and everyday use?

Read on for our full review.

While it's not as discreet looking as the Level Touch Lock, the Eufy Smart Touch Lock has a nice, slimline, unobtrusive look. And unlike with the Level Lock, you don't have to have your phone on you for the touch-to-unlock feature to work.

It's large, but not bulky, about half the size of the Lockly Secure Pro and Nest X Yale locks, which are both large and bulky. Eufy has managed to pack everything into a really slim form factor, both for the exterior and interior.

The exterior portion is made of a smooth black plastic with a sleek design that blends in well on our dark green door. While It doesn't match your existing hardware as the Schlage and Kwikset smart locks can, we did like its keyhole cover, which makes the whole lock look more modern and high-tech than those more traditional looking offerings.

A touch-screen keypad sits between a round fingerprint reader and the keyhole cover, and while that cover is a bit tricky to slide open, with so many ways to open this door you're probably not going to be removing it much.

Eufy gives you five physical keys - rather more than most offer, but as these are not standard keys and they need a locksmith to copy, getting a few extras makes up for that potential hassle. It does mean you can't rekey this lock to match any other exterior locks you may have.

On the inside, there's a slim housing for the mechanics and batteries. Here, instead of the standard four AAs you get a more earth-friendly rechargeable 10,000mAh battery pack - a genius idea really.

Locks eat batteries and rechargeable makes so much sense for a door lock. Plus, Eufy says this will last a year, compared to most Wi-Fi locks which need new batteries every couple of months that's impressive

The downside though is there will be 6 hours while you recharge it when you won't be able to unlock your door with anything but a key - but Eufy says it will be selling spare battery packs if that's an issue for you.

Installation was really simple, aided by Eufy's excellent "color by numbers" approach - each item is boxed or bagged and labelled with a number that corresponds to the very clear instruction manual.

This is a full replacement door lock, so you remove your old deadbolt and put this in its place. But it's a simple process, taking under 15 minutes and requiring just a Philips head screwdriver.

Once installed, pairing the lock is done over Bluetooth, you scan a QR code on the back of the lock and the Eufy app recognizes the device - really simple. You do need to create an account in the Eufy app.

Then you connect it your Wi-Fi - the radio is on board so there's no need to plug in a Wi-Fi bridge somewhere nearby. The lock then calibrates itself and has a sensor inside that tells it if it's open or close - so it won't lock if the door is open.

This would be handy as it means you don't need an external door sensor, but there is no way in the app to see if the door is open or closed, and in testing it did still lock itself even when the door was open.

The final step is to set up users in the app. You can assign numeric codes to people and set up fingerprint access by pressing and releasing your finger on the lock's keypad.

The big selling point here is that fingerprint reader - which is ideally located right on the front of the lock (the other fingerprint reader lock we've tested had it round the side and we couldn't squeeze our finger between it and the doorframe to access it).

Just place your finger on the pad and your door unlocks in under 3 seconds. No need to have a phone on you or any other identifying device, this lock relies on biometric unlocking. You can add up to 100 users and 50 fingerprints, with multiple prints per user. We added four users and 10 fingerprints and they all worked equally as well.

The touchscreen keypad is similarly well-designed with plenty of room between buttons making it easy to tap in your code. The keys also make a sound and light up when you touch them for easy access at night.

Codes are programmed in the app and can be 4 to 8 digits. You can turn on a "scramble passcode" setting, which lets you add a couple extra digits before and after your code to confuse any sneaky onlookers.

The keypad also has a lock button you can long press to lock the door when you're leaving, or use the auto-lock feature that will automatically lock your door after a pre-set amount of time (up to three minutes).

You can also set a schedule that turns on auto-lock for a set period of time (say between 10 p.m. and 8 a.m.), this is a neat feature we've not seen on other locks - and is handy if you're in and out a lot during the day and don't need the door to be constantly locked.

The other ways to control the lock are using the app - either Bluetooth if you're close by or over Wi-Fi if you're away from home; using voice control - Alexa or Google, and a PIN is required to unlock; or using a key.

You can share access with up to 100 people using numeric codes and schedule access for individuals, plus set it to expire - ideal for Air BnB tenants.

An Event Log in the app shows you who unlocked the door and when, as well as if it was manually locked or unlocked, or if it auto-locked.

Our household has used virtually every smart lock out there, and for a family of four with two children who don't own smartphones this is the best lock we've used.

The multiple access points are what make it so good - and the fact that they all work as advertised. A keypad is great for kids, they don't need to carry a key, or key fob to unlock the door. And the fact that this one uses tones to indicate you've touched a button means it's really easy to use.

But the fingerprint reader is even better, both for kids and adults alike, getting you in the house in under 3 seconds, by far the quickest of any lock we've tried.

The app control is also pretty snappy - especially over Bluetooth, although it was a bit slower to connect if we tried to lock it or unlock it while sitting in the car in our driveway over Wi-Fi.

The manual lock option, where you press the lock button as you leave, takes a little too long - 4-6 seconds, so we found setting the auto lock to be more convenient.

Integration with voice assistants was excellent, letting us lock and unlock using our voice (and a PIN code) with an Echo speaker or Google Home. Plus, we could add the lock to both Alexa and Google routines.

There's no HomeKit support or integration with SmartThings, and there's no option to lock or unlock based on your location (Alexa won't allow you to add locks to location-based routines).

We were a bit disappointed with the integration in Eufy's app. We have a Eufy video doorbell installed but you can't connect the lock and doorbell to control them from the same screen. Although, it's only a couple taps to get from one to the other.

Overall, Eufy's app is easy to use, and you can lock and unlock from the door lock screen, view lock events, and manage access. You can also use the Alexa app to lock and unlock if you prefer running everything through one app.

Our biggest problem with Wi-Fi locks to date has been battery life, having to replace them every couple of months is a pain.

Eufy says its battery should last a year, which we were very excited about. We've been using it for a month and it's down to 3 bars from 5 - so we think a year is optimistic, but it's still better than most we've tested and we reckon we're on track for about 4 months until we have to recharge.

There is a micro USB port on the outside of the lock, so if you were to get locked out due to a dead battery you could use a portable USB charger to get you back in.

Finally, a big drawback of some smart locks is how noisy they are - listening to grinding mechanisms can be pretty irritating. But we were pleased with Eufy's decibel level, it's quiet enough not to be annoying, but audible enough that you can hear it lock and know your home is secure.

Eufy Smart Lock Touch & WiFi review
This lock ticks all the boxes; easy to use, easy to install, multiple options for access, a nice design, and plenty of smart home integrations. The fingerprint reader is an excellent feature, making it super easy to get into your home with no need for a key, phone or fob. While it's priced comparably to other high-end smart locks, it offers more options than most for that $250, and you'll save in the long run on batteries thanks to the recharge battery pack. We'd love HomeKit integration (Eufy's cameras are HomeKit compatible), but it's not a dealbreaker. If you're looking for a great smart lock this should definitely be on your shortlist.
PROS
CONS
TAGGED    Smart Locks    smart home