The best retrofit door lock just got even better 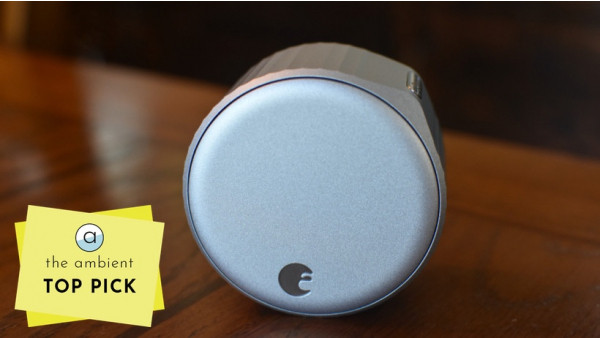 If you want a smart lock but don't want to (or can't) replace your entire deadbolt, August's line-up has always been your best option. Just swap out your thumb-turn for this retrofit smart lock and you're good to go. But, as with all smart locks, you're still left with a bulky, noisy, relatively unattractive thing on the back of your door.

A completely redesigned version of the August Smart Lock Pro, the August WiFi Smart Lock is almost half the size and 20% slimmer, plus it has Wi-Fi built in, so you don't need any additional hub or bridge for remote access.

At $249, it's still pretty pricey for a smart lock, especially considering you're only replacing half the lock, but it doesn't skimp on features, looks beautiful (which is not something you can say about any other lock) and works really well.

We've been testing the August Wifi Smart Lock for two weeks now, read on for our full review.

Industrial designer Yves B├®har has completely rethought the fourth generation August lock, introducing a softer surface, more rounded edges and textured ridges that provide a more solid, doorknob-style feel when you open and close the lock. A new, smaller ridge on the lockŌĆÖs outer ring also helps you see at a glance if it's locked or not.

It really feels like a doorknob and not a smart lock, and the significantly smaller size makes the August WiFi Smart Lock blend in better with traditional door hardware, so it won't feel so out of place. The reduced size is courtesy of a smaller motor drive train and a new battery compartment with room for just two CR123 batteries as opposed to four AAs.

Despite its smaller size, the lock packs an extra feature - integrated WiFi, so there's no need for a bridge or smart home hub to control it when you're away from home. The WiFi feature is optional however, if you'd rather just stick to Bluetooth control when you're nearby.

The August WiFi Smart Lock is 45% smaller and 20% thinner than its predecessor, the August Smart Lock Pro (left), which August will continue to sell. It's available in silver (pictured) and dark grey.

Of course, you still get August's signature auto-unlock feature, where your door will automatically unlock itself as you approach, along with all the other features that make August the most fully-featured smart lock on the market, including auto-lock settings and DoorSens that tells you if your door is open or closed before you lock it.

Through the app you can remotely control the lock, send e-keys to people and manage their access, see an activity feed that shows who or what unlocked or locked the door and when, and set up smart alerts to know when the door is locked or unlocked manually, by a certain person, auto-locked or left open.

The lock also integrates with August's doorbell cameras, including the battery-powered View, so you can lock or unlock it right from the doorbell's video feed in the app.

This is without a doubt the easiest smart lock to install because you don't have to remove your existing deadbolt. We installed it in under 10 minutes.

It's compatible with most deadbolts and you just need a Philips head screwdriver to detach the back of your current door lock and replace it with the August backplate. Then you attach the lock by snapping it into place with two plastic wings.

The smaller lock fits on to a door we'd not been able to use a smart lock on because of the door molding, so we immediately saw the benefit of the slimmer design.

New with the WiFi lock is a second plate to use if the August lock is smaller than the hole left by your existing thumb-turn, but otherwise the install process is the same as previous generations.

The DoorSense sensor is still included, and can be installed on or in your door frame to tell you whether your door is open or closed. It's optional, and easiest to just stick on the frame, but if you're up for a little more drilling and work it can be fitted flush inside the door frame.

Once set up you'll need to enable the lock's Wi-Fi capability within the app - it's not on by default. This gets you remote control of the lock and the option to set up features such as auto unlock and smart alerts.

As for smart home integrations, you still get Alexa, Google and HomeKit integration, so you can lock and unlock your door with voice control (pin codes are needed for Google and Alexa unlocking) and integrate it into scenes, automations and routines. The lock also works with the SimpliSafe security system and the AirBnB integration continues.

There is one notable smart home exception - no Z-Wave. But it does still work with SmartThings thanks to a new direct integration that bypasses the SmartThings hub. Presumably the lack of Z-Wave is why August is continuing to sell the August Smart Lock Pro - which has Z-Wave compatibility.

That lock is currently on sale for $229, and is still a great lock if you have the space for it.

August WiFi Smart Lock: In Use

The beauty of the August lock is that while it's very smart, you can still use your existing keys, so you're not sacrificing any functionality nor replacing anything. But it's three biggest flaws have always been the lack of an integrated keypad (you can buy a Bluetooth one for $60), how bulky it is on the back of your door, and the annoying white box you need to waste an outlet on to get control when you're away from home.

The new August WiFi Smart Lock fixes two of those problems, making this the best smart lock available today - if you're willing to pay over $300 (including the keypad).

The smaller design isn't just for aesthetics, it actually makes it easier to use. With earlier versions my children would struggle to turn it, and it didn't fit on our front door. With the WiFi Smart Lock my kids can easily open and close it manually and it's barely wider than the Schlage thumb-turn it replaced.

With built-in, power-hungry WiFi I do worry we'll be replacing those pricey CR123 batteries a lot more frequently (although the design makes this easy to do - you just pop off the magnetic cover). August says they will last 3 months with around 10 uses a day. We'll update this review once we have a better idea on battery life.

But you just can't beat August's auto-unlock feature - which uses your phone's Bluetooth to identify when you get close to your home and then unlocks only when you're right in front of your door. While it's not the only smart lock to do this, it's the only one that does it really well and totally reliably.

In our testing unlocking wasn't instant, but we found we were waiting no more than 2 or 3 seconds, no more time than it would take to find our keys on the first try, assuming our hands weren't full. Most importantly, it unlocked every time and that kind of ease-of-use and reliability is just really smart.

August WiFi Smart Lock
August's locks are the Holy Grail of smart locks - you can unlock them with a key, with your smartphone from anywhere, with a keypad and just by walking up to it with your phone in your pocket. Plus, they work with every major smart home platform. As the fourth generation, the August WiFi Smart Lock makes things better by being smaller, sleeker and smarter - getting rid of the WiFi bridge. We'd still like to see that $60 keypad included, but you can't beat this lock for ease of use, quietness of operation, and an attractive design that fits into almost any home decor.
PROS
CONS
TAGGED    Smart Locks    smart home