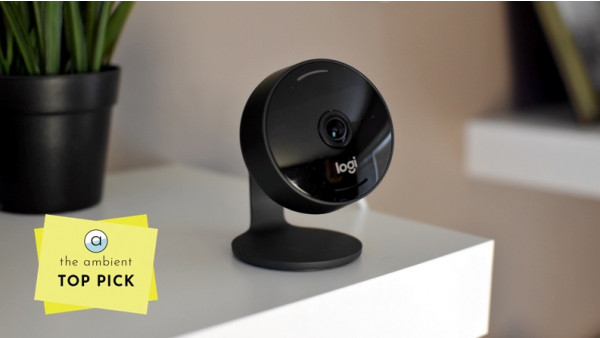 HomeKit compatible security cameras are coming thick and fast now that Apple has released its HomeKit Secure Video platform, and the Logitech Circle View is now leading the pack

Following hot on the heels of the HomeKit Secure Video cameras like the EufyCam 2 and the Eve Cam, the Circle View features a slick design, indoor/outdoor capabilities, and a whopping 180-degree field of view.

The Logitech Circle View is so tightly integrated with Apple HomeKit that it doesn't even have its own app, it's HomeKit all the way. This is a brave new smart home world.

A wired smart security camera, the Logitech Circle View is the successor to the popular Logitech Circle 2, which has similar specs - including 1080p video, 180-degree field of view, two-way talk and IP64 weatherproofing.

However, the Circle View ditches 5GHz WiFi compatibility for some reason and also doesn't have any of the nifty accessories the Circle 2 has, which is a shame.

Of course, this is HomeKit only so there's also no integration with Amazon Alexa or Google Assistant smart speakers or smart displays.

Plus, because of its reliance on HomeKit Secure Video, there's no option of continuous video recording, although it is technically always recording and processing the footage locally and only saving recordings when it spots something you asked it to look for - motion, person, vehicle or animal.

We've been living with the Logitech Circle View security camera for a month now, here's our take on whether it's worth your cash...

The Logitech Circle View is a good looking, compact camera whose small size belies its wide range. Encased in a smooth, matt black, plastic housing, the glass lens can see clearly for 180 degrees, and up to 15 feet at night, thanks to an enhanced night vision sensor. A red LED strip at the top of the camera indicates when the camera is on.

The sturdy metal base is permanently attached to the camera via a hinge that lets you move it 180 degrees up and down, and 360 degrees around - presumably where the circle name comes from (that and its circular design).

The base means you can stand the camera on any flat surface or you can use the very thin, rather flimsy wall mount to install it vertically.

This 180-degree vertical adjustment means you can flip the camera on its face for complete physical privacy - for when you just don't trust the off button. Speaking of buttons there is a small one on the back that will also disable audio and video recording. Amusingly, Logitech references this button as useful "so youŌĆÖre not left fumbling during private moments."

Unfortunately, while we appreciate the ingenuity of the mount and the stylish design of this camera, it's all rather ruined by the clunky white, 10 foot charging cable.

This thing is permanently attached to the base, presumably due to the weatherproofing, but its inflexibility hampers how you can position the camera, especially if you have it flat as its so stiff it can lift the very lightweight camera up.

Also, the standard USB type-A cable has to be plugged in inside - the power brick in only rated for indoor use. All combined, this makes it a pain to use outdoors as you'll need to drill a hole in the wall for the cable to go into your home.

The Logitech Circle View is one of the simplest home security cameras we've ever setup - it took about 2 minutes. Because it doesn't have its own app there's no sign up, downloading or logging in to do. You just plug it in, open Apple's Home app, scan the HomeKit code and you're golden. It's that simple.

No app also means it only has HomeKit-approved software features, which currently include 1080p HD live streaming, recorded videos accessible for 10 days, motion alerts (including smart people, animal, and vehicle alerts), two-way audio, and rich notifications that send you a clip on your lock screen and let you play that clip directly from the notification. You can also dive deep into customizing what notifications you receive and when.

Handily, the camera acts as a motion sensor and LUX sensor (light sensor) in HomeKit. Currently, you can use the motion sensor to trigger automations, which the Home app will suggest to you.

For example, when we set up the Circle View in the Garage, the app offered to create an automation to turn the garage light on when the camera detected motion. The LUX sensor doesn't yet appear as an option for triggering automations in the Home app, although you can access it in other HomeKit apps, such as the Eve app.

One feature we really missed is the ability to add motion zones, although Apple has said it will be arriving with iOS14 (we tested the camera on an iOS14 Beta, but it still didn't include that feature - iOS14 is scheduled to be released later this month). You also can't tweak bandwidth usage, adjust picture quality, set the frame rate or adjust motion sensitivity and re-trigger time.

What you can do is have complete control over your privacy. Beyond the physical privacy features we've discussed, the real appeal of a HomeKit camera that uses HomeKit Secure Video is privacy. And these features are across the board on any HKSV enabled camera so aren't unique to the Logitech Circle View.

Basically, HKSV stores all your footage on Apple's servers to which only you have the keys. When video is recorded it's encrypted end-to-end and then sent to iCloud.

To view recorded footage you need a $2.99 a month, 200GB iCloud plan and it doesn't count against your storage. If you add more cameras you'll need to upgrade to a 2TB plan ($9.99 a month).

But, and this is a big but, you have to setup a HomeKit hub to use HKSV - a HomePod, iPad or Apple TV. This is because the hub is the one doing the analyzing of the footage to tell you if it's a person, pet or vehicle - and it's doing it all locally before it's encrypted, something other cloud-based security cameras can't do. This all makes it securer and snappier.

Once the camera's set up you can choose from four options for recording based on whether you're home or away:

While this is similar to the geofencing shut down options many other cameras offer to protect your privacy, it's more nuanced as it doesn't remove the ability of your camera to be part of your smart home just because you don't want it to record you.

This means you can still have motion trigger automations, like having the lights turn on in the morning without getting footage of you in your underwear.

The Logitech Circle View delivers really good video, including bold colors and excellent detail. Because it's just 1080p, rather than 4K (a limitation of HomeKit), zooming doesn't get you much detail, but the super wide 180-degree field of view means you don't need to worry about blind spots.

Plus, while it's an expensive camera, it can cover a lot of ground so you could see some savings there.

The wide angle lens does get some fish eye distortion at the edges, but nothing too distracting. We tested it primarily outdoors, a more challenging environment for a camera, and it didn't disappoint. Night vision was very good, much clearer than the Eve Cam we are also testing.

The smart detection features were also excellent, identifying a person over 100 feet away (walking along the street in the screenshot above). It was also spot on with vehicle and animal detection, and we didn't get a single false positive motion alert (we turned off "any motion" and only asked for alerts for specific motion - such as if people, animals, or vehicles were spotted).

At one point we even got an alert to our Apple Watch with a snapshot and the notification that a person and animal had been spotted. A first for us and we've tested a lot of smart cameras.

The few issues we experienced were to do with HomeKit, but as Logitech doesn't offer its own app they're Logitech's problems too. The main one was the camera dropped offline a few times. It would always come back, eventually, but there was no rhyme or reason as to why this was happening and also no way to fix it other than to just wait.

Also, after a power outage, the camera refused to reconnect and after a couple days we just gave up on waiting and had to reset it. But as setup is so easy this wasn't the huge issue it can be.

The Home app is generally a very good experience for accessing and viewing footage. We particularly like that - when it works - the notification takes you to the event immediately with no lag or loading time, and the option to go live or scroll back through the footage is easily accessible on the timeline view.

The timeline view shows all the most recent events marked with a symbol indicating what caused it. You can also talk through the camera by pressing the Talk button, and the camera delivered clear audio, although there was some lag time.

Oddly, you can't trigger a recording from the app - Apple decides when it will record. And we say "when it works" because sometimes when we tapped on a notification it would take us to the Home app's home screen (where all the devices are) rather than the video feed.

But by far the standout feature of the HomeKit experience is the way it handles recording video. Through HKSV the camera is always recording (unless you have it set to Off) and while you can't access this continual stream HKSV is constantly analyzing it for any motion.

This means it's not relying just on a motion event to trigger recording so you never miss any of the action. In our testing the Home app always served up clips that were long enough to make sure we saw all the action from start to finish - something no other camera we've tested without continual video recording has been able to do.

Logitech Circle View
This camera is super easy to use and for the privacy concerned ticks all the boxes. It only works with Apple, but if you have a HomeKit home and are looking for a great camera to add to your setup this is a good looking, top-quality option. The cable is a bit of a challenge, so think about how you'll install it before buying. There are also cheaper HomeKit options out there - such as Eufy Indoor Cam 2K - but most don't have the indoor/outdoor flexibility the Circle View offers.
PROS
CONS