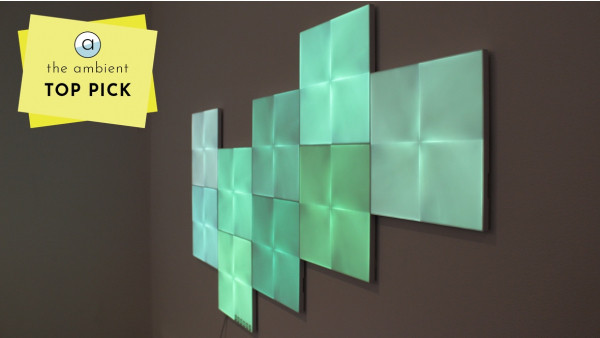 Smart lighting is sometimes a drab affair. E14 this, GU10 that, often demanding you hook up yet another external hub. But not with Nanoleaf. No, this is one company that does things a little differently. And that's again true with the Nanoleaf Canvas, with the company's light panels this time coming in squares, as opposed to the triangles of its previous lights.

It's true that there's a lot more DIY involved with a Nanoleaf kit, but the results allow for more personalization, more fun and more ways to show off your living room to friends. And really, that's what having a centerpiece is all about, isn't it?

Read this: Complete guide to Nanoleaf

Well, if you can afford it. The starter kit of nine panels comes in at $229.99, while the expansion kit of four panels (which you're likely to want once you begin scoping out your design) sets you back an extra $79.99.

We've been living with the smart light setup for the last few weeks, playing games on the touch-sensitive panels and letting it light up to our music. Here's our verdict on the setup, performance and smart integrations that come with the Canvas.

The actual design of the Nanoleaf Canvas is something we won't spend too much time on here - it's square, with four neat mini-panels on each one and three different spot on the back to place the linkers and sticky tabs (included in the set) in order to make them part of a bigger picture. It looks nice, and if you don't like square-shaped lighting up things, well, you're a square.

However, your design - and the setup that involves - is the real story here and, truth be told, it's probably the most aggravating part of the Nanoleaf experience. It's not that Nanoleaf makes it hard, but the task of finding a design you actually want to stick to your wall, ensuring it's actually possible and then successfully sticking it together without any gaps is exactly how it sounds - a hassle. It took us (and our admittedly tiny brains, unable to work out basic logistics or find a spirit level in the house) around two hours to complete from start to finish, and that was with two housemates helping out.

Get started: How to set up your smart home

Now, the reason we say Nanoleaf itself helps with this is because of the comprehensive how-to videos within the app, and, more importantly, the virtual layout assistant. With this, you're able to enter the number of panels you have, fix them into a combination that can work with the linkers available and then see an AR model of your creation using your smartphone camera. Of course, alongside this, make sure you lay all the panels out on your floor and fix them together to double check before hand, then you can slowly begin to stick them together.

There's no way around this kind of setup hassle, unfortunately - it's just the nature of sticking stuff to a wall. Unless you're a maverick and you don't care how they link, then you're fine.

However, Nanoleaf did announce that a mounting grid kit will be coming over the summer. It's more tailored towards commercial setups of the Canvas, making it easy to snap panels in and out, but we'd be intrigued to see if it translates at all to the home. Especially for those, like us, who live in rented properties.

The sticky tabs, as we found out when we accidentally stuck the main control panel upside down (we told you about out tiny brains, didn't we?), leave a bit of a mess on the wall, so keep this in mind and be prepared to re-paint if you want to change things up or get your deposit back from your landlord when you move out.

Or, alternatively, do like we didn't, and pick up some velcro tabs instead. This is what Lifx's panels use, and it's a lot less likely to cause damage.

We're reluctant to mark Nanoleaf down too much for the setup, but the fact it's a not a one-person job should probably be better stated when you're going through the initial steps in the app.

Once you've got it fixed to the wall, we found it to be fairly easy to get connected. You scan the code on either the back of the main panel or the box, and that should see the app shake hands with your kit. Then you're ready to experiment with what's on offer.

The Canvas has features in spades. Not only are the light panels touch-sensitive, letting you play games in Interactive mode, but they're also smart enough to be pick up and react to noise around them, in something called Rhythm Mode.

Or, you know, you can just have them show a steady set of the same color or slowly flicker between a pattern. Seriously, through the Nanoleaf app, it's all there. And whether the scenes you want to try out and download to your dashboard are from the company itself or developers, there's enough there to explore for a good while. And even if the Discover section doesn't do it for you, creating your own scenes with painstaking amounts of detail is also possible.

So, on paper, it all looks good, but how does it work in practice? Well, below is how the Canvas picked up the Rhythm mode for a track playing on our bedroom speaker:

Pretty good, right? While we suspect this mode will just be a novelty for most Canvas owners, there's a couple of things to note here. First, it's not great for every kind of music. The above sample, Ramin Djawadi's The Night King, from the Game of Thrones Season 8 soundtrack, works well because it's slow with distinctive piano sounds.

Put something on with a lot of percussion, for example, and it becomes more of a manic jumble. The sound will also need to be pretty close to the actual panels for it to work effectively. In the video above, our speaker sat on the top of the bed's backboard, but if it was on the other side of the room, there would be a noticeable lag in the Canvas' feedback. Again - this is a novelty feature, but it would be pretty cool if the panels could be set to listen for specific sounds - such as vocals - and light up from there.

Read next: Nanoleaf Hexagon will launch before the end of 2019

Oh, and if you're wondering how the Canvas is doing this - it's all through the built-in microphone on the panels. All the syncing in Rhythm Mode occurs locally, and only when the feature is turned on, so nothing's ever recorded or uploaded to Nanoleaf at any stage.

The actual functionality and process is a bit different for the Interactive mode, as all the feedback is based on the touch of your hand. It's a novelty, too, but when you can play the likes of Whack-A-Mole, Pac-Man or memory games on your smart lights, why not? Philips Hue can't give you nearly this much fun, can it?

For all the bells and whistles, often what you want from your smart lighting fixture is reliability. Thankfully, the Canvas, for the most part, offers steady performance - even if it's not quite on par with the best in the space, Philips Hue.

The lag time from app-to-wall is minimal, scheduling is thorough and works consistently, and for users who just want the Nanoleaf to remain pretty on their living room wall and show a solid color, you'll be well served here.

But not without the odd fumble. The Nanoleaf app, while chock-full of different scenes and controls to try out, does crash from time to time, and the fact that there's no hub involved here is both a gift and a curse. The good part of this, obviously, is that you only need to install the app and you're away, but the negative bit of this, we've found, is that connection from the phone does tend to slip from the main panel on occasions, or not be able to establish a connection altogether.

When it slips, it actually flashes in the bottom-right corner of the main control panel, which is a real nuisance if, like us, you've got it in your bedroom. In the dead of night, this has woken us up a couple of times already - meaning we ended up turning the plug off at the wall every evening to avoid the issue. Not ideal.

You'll likely find yourself controlling the state of your Canvas lights primarily through the Nanoleaf app, or on the touch panel located on the main control panel, but there's also the potential to hook it into the rest of the smart home - with support for Alexa, Google Assistant and Apple HomeKit present.

It all works at a fairly low level, mainly due to the fact this isn't native support. And while that means you can link the Canvas up to your home, you'll need a speaker within the same space in order to talk out commands, such as, "Hey Google, turn down the brightness on Canvas".

It works well, particularly if you want to switch quickly between scenes or just turn it on or off, but there's not a great amount to it. And while building native support for a voice assistant would bring concerns over privacy, and potentially force Nanoleaf to support just one of the three voice assistants it offers compatibility with now, it does feel like the next step for the lighting setup.

Nanoleaf Canvas
If you're in need of a smart light centerpiece, or you just don't like the idea of bulbs or light strips, there's no better investment than the Nanoleaf Canvas. There's tons of innovative scenes and modes to explore within the app, and your design can be added to over time with the expansion kits - something that can't be said for the Lifx Tile. It does fall down in a couple of areas, such as the lack of voice control and the odd connection dip, but these issues remain footnotes thanks to the huge enjoyment you'll get from lighting up your place with these panels.
PROS
CONS