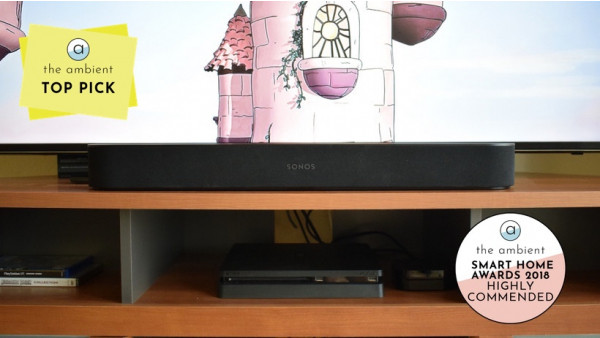 2018 is shaking out to be one of the biggest years in Sonos' history. Not only did the high-end speaker company go public, it also launched the Alexa-powered Sonos Beam soundbar, rolled out AirPlay 2 support across its product lineup, and pushed out a brand new Sonos Amp.

In fact, since the launch of the Sonos One late last year, the company has been firing on all cylinders. It realised that while Amazon, Google and others were building the future of speakers, Sonos had been looking the other way. ItŌĆÖs always made fantastic sounding speakers, but now, under the stewardship of CEO Patrick Spence, itŌĆÖs dragging itself into the new era of the smart home.

The ┬Ż399 Beam neatly ties these two threads together. ItŌĆÖs a sound bar exhibiting typically excellent Sonos quality, while offering smart features like Alexa and AirPlay 2 that make it smarter and more connected.

ItŌĆÖs a surprisingly compact soundbar that remains affordable. Sonos still also has the more expensive Playbar available, which means a few compromises stop the Beam from being the best in the range. WeŌĆÖll get to those.

WeŌĆÖve been living with the Sonos Beam sounder for a while now. HereŌĆÖs what we think of it.

This warrants repeating: The Sonos Beam is surprisingly modest in size. ItŌĆÖs 26 inches wide ŌĆō 30% shorter than the Playbar ŌĆō and 2.7 inches high. If space is at a premium for you, the Beam is probably going to find a fit. This makes it a great choice for anyone in a smaller house or apartment who doesnŌĆÖt want a hulking soundbar monopolising the living room space. The compact design means itŌĆÖs not likely to block any of your view either. I have mine sat under a Samsung smart TV, and at most it will cover the Samsung logo, depending on how IŌĆÖm sat, but never more.

The Beam is available in white or black, both of which have the same wraparound cloth grille, and although thereŌĆÖs no included wall bracket Sonos sells one separately for $59. One of the things I like most about the Beam is that it looks good enough to have it displayed proudly, which is more than can be said for a lot of soundbars on the market.

Onto the all-important port chat. The Beam has a single HDMI port in the back andŌĆ” thatŌĆÖs it. Other than the ethernet port (useful for when you Wi-Fi is sketchy) there are no other inputs here. But that HDMI connection works best if you have a TV that has HDMI ARC support (audio return channel). Put simply, ARC is what gets sound from the TV and connected smart devices and services, but itŌĆÖs also used for using voice controls, and for using your TV remote to control the Beam.

If you donŌĆÖt see ARC labeled by a HDMI port on your TV, be sure to check through the settings menus, as sometimes it needs to to be enabled. If youŌĆÖre completely out of luck (TVs that are more than five years old are less likely to have it) then Sonos includes an optical audio adapter in the box, which will still let you use the Beam as a soundbar, but means no voice controls. I donŌĆÖt think this completely defeats the purpose of the Beam, but it's certainly less of a value proposition.

Once youŌĆÖre plugged in, setup is quick and easy. The only part that takes a couple of minutes is TruePlay, which uses the microphone on your iPhone or iPad to ŌĆ£mapŌĆØ out the room around it and tune the speaker accordingly. This requires a bit of a dance around the living room as you wave and weave your phone through the air. Note I specifically said iPhone and iPad: If youŌĆÖre an Android user, you wonŌĆÖt be offered this feature during setup, but Sonos plans to make its speakers self-adjusting down the road, the way the Apple HomePod is.

Onto the main event. In short, the Beam sounds great for its size. That's because Sonos has crammed a fair amount of tech in here. There are four full-range woofers, a centre-mounted tweeter, and three passive bass radiators. The Beam has a centre channel, a left and a right, and together they create a pleasantly wide soundscape with clear separation.

However, thereŌĆÖs no subwoofer here, and the bass on the Sonos Beam, while no means terrible, does lack some detail. It certainly won't be rumbling through your floors. But that's not to say it's bad. As we watched giant monsters level Chicago in Rampage (yes reader, we went there for this review), we never felt underwhelmed.

The question you must ask yourself is: How much do you want Sonos to bring the bass? Are you willing to spend $700 on an additional Sonos Sub ŌĆō or $1000 for the bundle deal? It's a ludicrous amount of money for not much benefit.

Another way to get more out of the Beam is to pair up other Sonos speakers for surround sound; however youŌĆÖll need either two Sonos Ones or two Play:5 speakers to make this happen. If you donŌĆÖt happen to already have those, or have them placed elsewhere in your home with no intention of moving them, getting a 5.1 surround system setup becomes a pricey prospect.

There are a couple of sound modes you can flick to. One is night mode, which suppresses large bangs and explosions and ups the volume of softer sounds and dialogue. If youŌĆÖre still struggling to hear characters, the dialogue enhancement mode will push that dialogue up further.

My apartment isnŌĆÖt huge, but my living room makes up almost half of it, and the Beam has filled the space no problem. If youŌĆÖre in a much larger space, however, I expect the limitations of the Beam will be more apparent without other speakers to work with.

Where I've found the Beam less impressive ŌĆō and it's not all that surprising ŌĆō is for music. This thing has been tuned for TV and movie viewing, and that shows if you try using it for music. I listened to The Kills' Future Starts Slow on the Beam then compared it to the HomePod and the Sonos One, and the Beam felt a little less open, balanced and obviously had less wallop on the low end. It's good, don't get me wrong, but this shouldn't be a speaker you're buying with music playback as a priority.

The Beam is the second Sonos speaker to come with Alexa built in, but the fact that this is a soundbar means you're going to use Amazon's assistant differently here to how you would on the Sonos One.

If you have HDMI ARC, you'll be able to ask Alexa on the Beam to turn the TV on/off and control the volume. Even better, if you have an Amazon Fire TV, you can ask Alexa to open apps and shows, perform searches, and control playback. You'll just need to get the two talking in the Alexa app first. And this is great stuff if you have Fire TV, but if you don't, Alexa's quite limited in control. Also if you own the latest Fire TV Cube, this already has Alexa built in, negating the need to have it on the soundbar as well.

But Alexa on the Beam is very good at hearing over loud noises, even from far across the room. I even tried speaking really softly during some blaring action scenes and it detected my voice no problem. Of course, as well as TV control you have all the standard Alexa fare too, so you can ask Alexa Beam questions as you would any other Echo, and have it control all your connected smart home tech.

As for Google Assistant, it's still MIA, but Sonos promises it'll be here by the year's end.

Sonos Beam
The Sonos Beam is impressive for its size, "beaming" out marvelous audio quality for the TV. Yes, controlling the TV with Alexa is great, but you'll want HDMI-ARC and, ideally, Amazon Fire TV to get the most out of it. But for those looking to upgrade their living room setup, the bonus of Alexa here gives this soundbar an added edge.
PROS
CONS 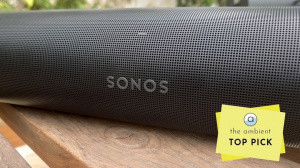 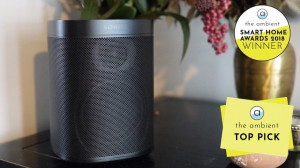 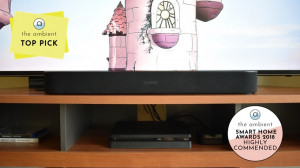 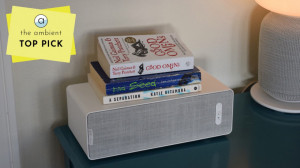