Smart home reviews from The Ambient

Why can't all smart home gadgets be this simple? 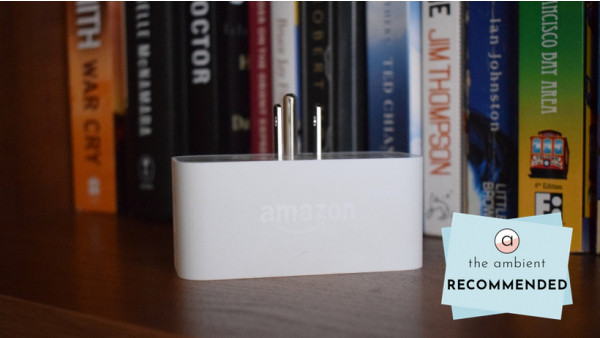 There are heaps of smart plugs out there to choose from, but not all smart plugs are born equal. Some will track your energy use. Some have useful integrations with other smart home gadgets. Some are a headache to set up. Some will occasionally decide they don't want to work. Most of them are ugly as sin.

The Amazon Smart Plug doesn't perform all the tricks of other smart plugs, but it's without a doubt the easiest smart plug we've ever used ŌĆō and one of the most reliable. If you're already in the Alexa bubble, that is. If you're a Google Assistant or Apple HomeKit user, we give you permission to leave now.

There are of course plenty of third-party smart plugs that work with Alexa, and it wasn't until recently that Amazon decided to offer its own. This doesn't have Alexa inside it, but it can be controlled from anything running Amazon's voice assistant. Think of this as the Amazon Basics option; it's the very definition of a "no-frills" experience, and for some people that will be absolutely fine. Especially for just $24.99.

Show me a good looking smart plug and I'll call you a liar. Plugs are boring and functional, and that's ok. There are degrees to their ugliness though, and some do a better job of not sticking out than others. The Amazon Smart Plug is a white rectangle that's 3.2 inches wide and 1.5 inches tall. It has a button. That's all you need to know.

Price when reviewed
$24.99
Buy on Amazon

It's not an object of beauty but it's less of an eyesore than some of the alternatives. It's also designed to keep adjacent sockets free, so points to Amazon for that.

Setup is where the Amazon Smart Plug excels. If you're already using the Alexa app, it could not be easier. That's because it's part of what Amazon calls its Wi-Fi Simple Setup, which lets you connect Amazon devices to your Wi-Fi in a flash. I simply put the plug into the wall, opened the Alexa app, and there was a notification telling me my new Smart Plug was setup and ready to go. And if that doesn't happen, you can just ask Alexa on your Echo or phone to discover new devices on your network, and it should find and connect the plug automatically.

Amazon will give your plug a name, but this can be easily changed to "Living room plug", "Kitchen plug" or whatever you want. You can rename it in the app or using voice by asking, "Alexa, rename [name of plug]".

Just remember you'll need to say the name out loud to Alexa in order to control it, so keep that in mind if you have a few of these around the house and don't want to be firing up the coffee machine when you ask Alexa to turn off the lights.

As mentioned earlier, the Amazon Smart Plug doesn't offer some of the features you'll find on other smart plugs. The big one missing is energy monitoring, so you won't be able to keep an eye on what you're spending, a feature you'll get on the TP-Link HS110 and the Belkin WeMo Insight Switch.

However, you can schedule the plug into routines and control it remotely from the app. So if you leave the house and suddenly panic that you left a connected appliance on, you can check the app and turn it off if you need to. What you can't do is create an 'Away mode', which will randomly turn your device on or off to make people think you're home. That's a neat feature found in other plus such as the aforementioned Belkin, but you won't get it here.

And remember the Amazon Smart Plug is Alexa-only, so you won't be able to use it with your Google Home or Apple HomePod. We should also note that it's an indoor-only plug, and it doesn't come with surge protection. Again, no-frills, but Amazon's Smart Plug is reliable, cheap and couldn't be easier to set up.

Amazon Smart Plug
Amazon's homegrown smart plug is all about simplicity: a breeze to set up, a breeze to use. It lacks the bells and whistles of other options, but if you're living in an Alexa home and want something that does the basics ŌĆō on/off commands and the ability to add to routines ŌĆō it's hard to argue with the First plug.
PROS
CONS