The second-gen Echo Plus is a big upgrade 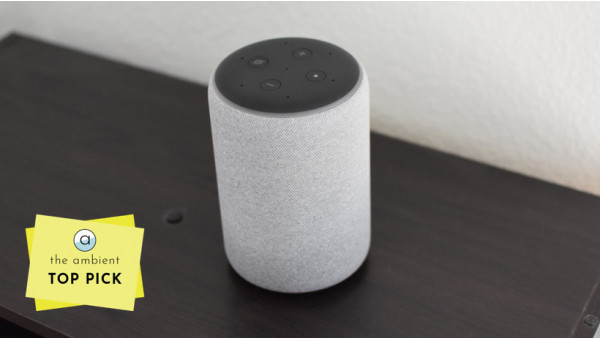 The original Echo Plus always felt a little awkward. The Echo regular had just gotten a brand new design, and that made the Plus feel like Amazon just slapped a Zigbee smart home hub into the first-gen device.

For the second-generation Echo Plus, Amazon went back to the drawing board. It's given the smart speaker a facelift, drawing from the design of the new Echo; added a temperature sensor and boosted the sound quality.

Of the three Echo speakers, it's the most expensive and feature-packed option. However, there's also a new Echo Dot which also comes with improved sound for about a third of the price. So is the new Plus worth the extra moolah? We've been living with it to find out.

The new Echo Plus has jettisoned the tall, lanky and familiar original Echo design. That's now replaced by a fabric-based design that seems to be all the rage in the world of smart speakers. It's also shorter and fatter.

The more subtle design changes are easier to overlook, but just as welcome. The top of the device is no longer flat with a mic grill around four central buttons. Instead there's a subtle curve that eases into Alexa's light ring, which in turn eases into the side of the device. There are also six mic holes up at the top rather than that mic grill, too.

Read this: The ultimate guide to Alexa

You'll still see the same familiar buttons: Mute, Alexa, volume up and volume down. Around the back bottom of the device you also still have the power port and a 3.5mm jack, which can be used for both audio in and out. So if you want to export sound from another device to the new Echo Plus you can ŌĆō but you can also send it from the Plus to another speaker.

The new Echo Plus' design is intended to blend better into your home than the last one, and we're not arguing with that. When put next to the old Echo Plus, it becomes obvious how boxy and dated the older version looks. It comes across as an old prop from a 70s sci-fi show. The new one looms more comfy, less of an eyesore.

Another thing Amazon has tried to improve with the Echo Plus is sound. The new Echo Plus sports a 3-inch woofer and a 0.8-inch tweeter. That woofer is bigger than the 2.5-inch woofer in the original Echo Plus ŌĆō and the result is obvious to the ears. It sounds much better; it's crisper and provides fuller sound with better bass.

And yes, the sound quality jump is apparent across the genres. I pitted the new Echo Plus against the original in a sound off with Lady Gaga and Bradley Cooper's Shallow as well as Drake's In My Feelings.

With Shallow, which is more of a soulful, acoustic ballad, the song sounded crisper and fuller. With the more thumping In My Feelings, the improved woofer was on full display with far better bass.

The Echo Plus' improved sound quality isn't going to have you replacing your Sonos One or any other high-end speaker, though. The Sonos One is still the best Alexa speaker for sound performance, but the new Echo Plus is much more pleasing to the ears than last year's model.

You can also pair up two Echo Plus devices for stereo sound, or partner up with an Echo Sub for increased sound performance. On top of that, you can adjust the equalizer for the Echo Plus, so you can tweak the bass, mid and treble in the Alexa app ŌĆō or just ask Alexa to do it.

The Echo Plus' addition of a Zigbee hub made it a great place to start when building a smart home. So much so that Amazon bundled in a free Philips Hue bulb with the original, a practice it wisely continues with the second-gen Echo tower.

That hub returns here, but still no Z-Wave. It would have been nice to see Z-Wave support added for 2018. There are over 94 million Z-Wave devices out there, which make up 70% of the smart home market. Alas, it wasn't on the cards.

Still, the hub is a wonderful feature and an edge over the competition. You can ask Alexa to discover your devices, and if they run on Zigbee ŌĆō like Philips Hue ŌĆō it'll add them to your list of devices. That means you won't need a separate white box to run them. It's an advantage that neither Google nor Apple can match, and it makes the Echo Plus the device to buy if you want to start a smart home. That also helps make Alexa the first-choice assistant for controlling the smart home.

It's worth noting that if you do use the Echo Plus instead of a dedicated hub, you may lose out on some features. If you use a Philips Hue bulb with the Plus you won't have access to custom scenes or syncing to your entertainment. You also can't use Philips' routine options, like home/away auto turn on/turn off and morning wake-ups.

Amazon Echo Plus
Buy on Amazon

Which we suppose is fine if you only care about one room. I had the Echo Plus set up in the living room, and could get the temperature of that easily. But if I wanted to know the temperature of my bedroom, or the guest room, I obviously couldn't without buying separate temperature sensors ŌĆō or an Echo Plus for every room of my house.

However, the temperature sensor is far more useful as the catalyst for routines. For example, you can arrange it so that if it goes above 90 degrees Fahrenheit the Alexa-enabled fan will switch on and cool the room down. And yes, you can do silly things too. I set up a routine where Alexa would start singing if it went above 80 degrees in the living room.

There's also Bluetooth connectivity. You can connect your phone to it to listen to music with some added oomph, or you can connect to other Echos or speakers. Dual-band Wi-Fi is on board, with support for 801.22 a/b/n/g/ac in either 2.4 or 5Ghz.

The new Echo Plus is also one of the debut devices for simple Wi-Fi setup, and we can certainly confirm that things are simple to set up. You just plug in your new Echo Plus, open up the Alexa app and it connects. The Alexa app already has your Wi-Fi credentials, so everything happens in the background without you having to worry.

One feature we were not able to test was Local Voice Control. This allows Alexa to control your smart home devices when the internet is down ŌĆō so you won't need to worry about not being able to turn on the lights at night, or controlling the thermostat or whatever you have to do. It would all be done on the Echo Plus itself. Amazon says this feature will arrive soon, and we'll return to test it once it's live.

Amazon Echo Plus 2018
The new Echo Plus improves on some of the original's weaknesses. It's got a wonderful new design that better blends into your home and much-improved sound performance. The Zigbee hub is as fantastic as ever, but Z-Wave support would have been nice. The temperature sensor is a good idea, but you'll need multiple Echo Plus speakers to take full advantage.
PROS
CONS