Is the time-keeping Alexa gadget worth it? 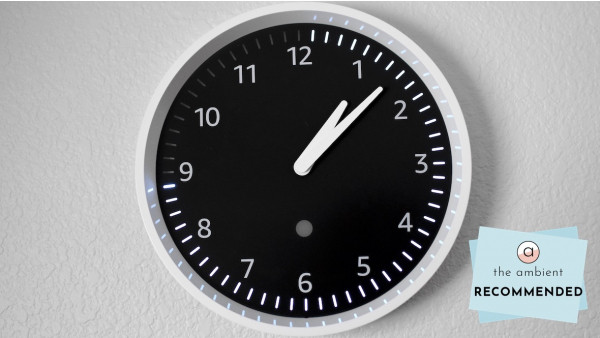 Alexa has long been really good at keeping time. Many smart home chefs have realised the cookies are done baking thanks to timers on their Echo devices, so it's no surprise that one of the most high-profile Alexa gadgets is all about keeping track of those timers.

But ŌĆō let's be real ŌĆō do you really need a second device to set a timer, when your smartphone does the job perfectly fine? Is an Alexa clock actually as a ridiculous idea as we first thought when Amazon announced it? I mean, how useful can it be?

We've spent some extended time with the Echo Wall Clock to figure that out.

You can't quite tell the Echo Wall Clock does anything smart at first glance. It looks like, well, a regular wall clock ŌĆō a good looking one. There's certainly a sparse, modern look to it that's pretty endearing.

It feels like it has the same sensibilities as the Mondaine Railway Clock. The two don't share a lot in common, but they do take pride in their sparseness. They also both play heavily with contrasts. The Mondaine uses a white background with black hashes and red accents; the Wall Clock uses a black face with greyish-white numbers and hands. The accents here come in the LEDs hidden around the numbers.

Read this: The best Alexa-compatible devices for your smart home

Those LEDs are used to measure the timers, and when they're on they look quite good. They add some nice character to the Wall Clock. In fact, Amazon has gotten pretty good at making gadgets that blend into your home, and this is no exception.

Of course, it's better suited to homes and rooms with more modern sensibilities. If you're into bohemian or classical furniture this will look a bit off ŌĆō but if you're in on modern or even art deco looks, it will look right at home.

Before you do all that though, you've got to set the thing up. Luckily, it only takes about a minute or two and is extremely easy. You pop the four included AA batteries into the clock and then ask Alexa to set up your Echo Wall Clock.

On the back of the Wall Clock there's a blue button that you have to hold down for 10 seconds ŌĆō once you do that, it'll enter into pairing mode. The hands will spin around to show you that it's syncing. It's real, real simple and is yet another example of Amazon trying to make smart home devices as easy as possible to set up. This isn't part of Wi-Fi Simple Setup though, as it uses Bluetooth, but it's still very simple.

If you set a minute, the whole clock will light up and count down. When you tell Alexa to start a timer on an Echo speaker, you don't get the visual element that the Wall Clock serves. With the Wall Clock, you just have to look up and you see. It's really handy, especially in the kitchen when you're doing a whole bunch of things and need to time your cooking process.

With the Wall Clock you can also set up to three timers at once. The first timer will be a solid line ŌĆō so if you set a timer for 10 minutes, all the lights from 12 to 2 will be lit up. The second and third timers will take up a single light; if you set a timer for 30 minutes it'll just light up the LED under 6 o'clock.

It's all easy to understand when you look at it (and to think, this was made as an experiment in Amazon's labs). While Alexa is super useful for timers, it can also do things like reminders and alarms ŌĆō though it's not as helpful there.

When you set a reminder or alarm, there isn't a dot to remind you when it is. There is a neat animation when you set it, and a nice flashing of lights when the alarm or reminder goes off, but otherwise? Nada. It's a bit of a letdown considering how well the timer section works.

The Wall Clock was having some issues with Bluetooth connection, which is how it'll link up to your Echo device. By the way, it's tied to a specific Echo. So when you use that Echo to set timers, your Wall Clock will mirror it. So be sure to put it in a room where you need to keep track of timers ŌĆō like a kitchen ŌĆō and pair it with an Echo in that room.

Amazon Echo Wall Clock
The Echo Clock is a niche product. If you use a lot of Alexa timers, this is going to make life a whole lot easier ŌĆō especially if you're in a kitchen and you can't or don't want to ask Alexa how much time is left or open the app. While it doesn't do as well at reminders and alarms and needs more designs, Amazon has something it can expand upon in the future here.
PROS
CONS
TAGGED    amazon alexa