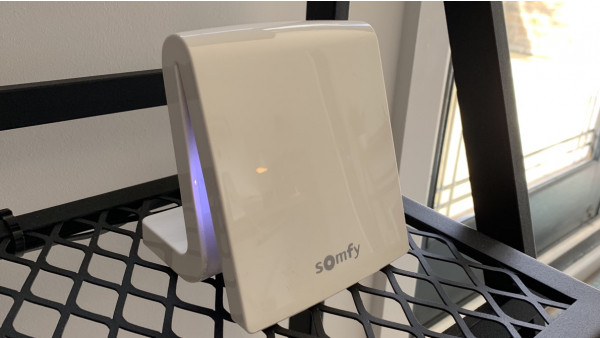 Somfy has been in the smart home business since the 1960s. If you count motorised blinds and shutters as 'smart', that is. And for the sake of making a point here ŌĆō I am.

The French company knows what it's doing when it comes to home automation. For years, you've been able to automate the opening and closing of Somfy-powered shutters and blinds, activating security systems and the like, all using wireless receivers and controllers.

In recent years, the company has made a real push in the evolving consumer-controlled smart home world; firstly by snapping up successful startups like MyFox and Okidokeys, in order to bolster the Somfy smart home range, but also by putting its Tahoma smart home hub front and centre of its portfolio.

What is Somfy Tahoma?

The Tahoma smart home hub itself is a fairly slick looking device that hooks up to your home's internet connection using Ethernet, talking wirelessly to the devices it's going to control.

You can add a maximum of 200 devices to a single Tahoma hub ŌĆō it packs Wi-Fi, Zigbee, RTS, IO and more. It's actually got a neat feature whereby the front of the hub has a touch sensor button, which you can configure to control a smart home scenario. It also has an LED light hidden beneath the panel that can be used for a range of actions ŌĆō such as flashing red if an alarm is triggered.

The Tahoma platform itself is the French company's attempt to pull all of your smart home devices ŌĆō Somfy and non-Somfy ŌĆō into one centrally controlled hub and user interface.

Apart from the hub, I've synced up a range of Somfy branded devices to my Tahoma system for this review. I've got window/door sensors, motion sensors, heat sensors, switches, remote controls, motorised blinds, sirens and more ŌĆō there's an absolute wealth of Somfy kit out there that's compatible.

Everything you sync up to your Tahoma system has to be added through the Tahoma web-interface ŌĆō Tahoma Link ŌĆō or a tablet app. Yes, there's a smartphone app ŌĆō but that's only good for carrying out commands once you've paired up and created automations in the web-interface.

It's 2019, and Somfy is still relying on a browser based user experience from a PC/tablet in order to set up and control its smart home system ŌĆō that's just silly. And what's worse is that this user experience is awful.

I've been reviewing tech products and platforms for over a decade and I've focused mainly on smart home systems in the last few years. If something is difficult for me to use, then what hope does a regular consumer have? We now, luckily, live in a tech age where things mostly just kind of work out of the box and sync up at the touch of a button or a scan of a QR code.

Not with Somfy, though. Just adding a product, even a Somfy-branded one, to the system is a challenge. Your first job is to decide what type of Somfy product is it that you want to add ŌĆō is it an IO device, an RTS one or an 'others Somfy' one within the configuration part of Tahoma Link?

How daft is that? Surely there is a much, much simpler way of adding a device. A searchable drop down list perhaps? Some nice icons? A code on the box? That's not my job to decide/design, but surely it's somebody's. Daft. Plain daft.

Even once you do manage to pair up your device, which may well have a different name on the box than it does on Tahoma Link, then you're in for an absolute world of pain trying to get that device to do anything smart.

Tahoma Link allows you (with a lot of effort) to create scenarios or create 'smart' actions. What's the difference between the two? Well, after living with the system for a few months, I'm still not all that sure. I think that scenarios are better for single action things; opening a blind, turning on a speaker and the like ŌĆō and 'smart' is best used when you want to group a few actions together; such as a motion sensor detecting motion between midnight and 6am, turning on a light and sending a notification to your phone.

Why these aren't just the same thing, in a single section ŌĆō as per Alexa, Wink, HomeKit, SmartThings and pretty much every other smart home platform ŌĆō I don't know. Why this isn't all just much, much easier to do out of the box and by using a smartphone app, only Somfy knows.

You'll find so many little bits that are just so messy you'll be amazed that they passed internal testing and made it out to face consumers. Tiny things, but terrible UI things. For example, once you've decided between IO/RTS/Others, the next screen that pops up asks you to choose what type of device it is you're looking to add. The first option is 'devices'. You have to check this and click an arrow before you can choose what device it is you want to add. Odd, indeed.

Somfy doesn't just want Tahoma to be the smart home hub for its own branded kit, though. Like Wink, Vivint SmartThings and the like, the company sees Tahoma as the central device controlling your whole smart home setup.

It's compatible with a whole host of big-name brands, including Hue, Honeywell, Sonos, Velux and more. There's also Alexa and IFTTT integration, as well.

However ŌĆō it's just so, so clunky to pair up anything in the first place, let alone set up the routines/scenarios to get any useful automations in place. Refer back to our woes in the previous section regarding just how nonsensical the Tahoma user interface is ŌĆō even just for Somfy branded stuff ŌĆō and multiply this by about four. It's just not worth it. There's no way I could recommend Tahoma as a hub for anything other than controlling Somfy stuff.

Alexa controls are okay, if somewhat clumsy, as natural language isn't supported since everything is scenario, rather than device, driven. For example, rather than seeing a Somfy motorised blind as a device, and saying something like, "Alexa, open the blinds in the kitchen", it instead requires you to create a scenario in the Tahoma browser-interface and then ask the Tahoma skill to carry out that action. For example, "Alexa, turn on open the blinds in the kitchen". Awful, I'm sure you'll agree. Even if you create a more friendly scenario name, you're going to have to say "turn on". Which is just naff.

Now, the Alexa app actually comes to the rescue here, as you can chuck a Tahoma scenario into an Alexa routine, and create your own command. But you shouldn't have to ŌĆō again, Somfy need to reconsider what it sees as user-friendly out of the box.

Somfy also makes a range of devices that don't actually work within the Tahoma system. And, even worse than that, these devices are much easier to use and the apps that control them are much, much better than the mess of the Tahoma user experience.

I mentioned up top that Somfy has snapped up a few smart home startups in its quest to compete with its more well-known (outside of Europe, at least) home automation rivals. One of these startups, MyFox, had a great smart home security system already on the market.

Somfy rebranded MyFox to Somfy Protect and has since added a few decent devices to the mix ŌĆō such as the new Outdoor Camera. I actually use Somfy Protect as my home security system and have done for a few years now.

However, apart from a couple of clunky crossovers to Somfy Tahoma, it's pretty much a totally separate system. You can have your Protect sensors add to any automations, for example, and you can't have your Protect system activate sensors in the Tahoma system. I've used this word already but it's worth reiterating ŌĆō daft.

Somfy Tahoma
The Somfy Tahoma box itself is a nice looking, easy to set up smart home hub. And some of the Tahoma kit is decent, too. The powered blinds, in particular, feel really high end and will certainly add a big splash of smart to any house. However, if you just want some cool blinds or shutters, we'd recommend just sticking to Somfy's remote controls. Stay away from the Tahoma automation system. It's a shambles, it's ugly, it's difficult to configure and it's littered with idiosyncrasies that will drive even the most tech-savvy people crazy. Somfy needs to start Tahoma from the ground up. In a world of easy-to-use smart home kit powered by the likes of Alexa and Google's Assistant, Tahoma is a massive step backwards. Somfy has some nice tech ŌĆō it really needs to get to work and create a system that makes it easy for people to use it.
PROS
CONS
TAGGED    smart home