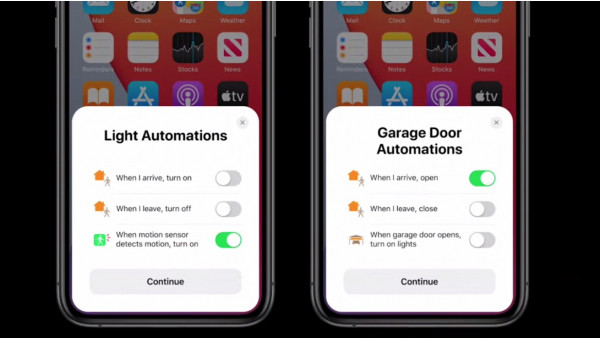 WWDC 2020 was a bit different this year, for obvious reasons, but we were still treated the usual Apple OS update bonanza now associated with the annual dev conference.

If you've lost count, we're up to iOS 14 now - or will be, when the new iPhone system arrives in September - and the good news is the updated platform comes with a bunch of useful looking Apple Home / HomeKit improvements.

Firstly, the Home app is being tweaked to make it easier for you to actually use your HomeKit compatible devices in a more useful way. When you add a new device to your Apple smart home ecosystem, the Home app in iOS 14 will suggest ways to combine and automate it with your other connected tech.

This Suggested Automations feature, for example, will ask you if you want to have a connected garage door open when you arrive home; or have a motion sensor turn your smart bulbs if motion is detected.

The next major Home update in iOS 14 is the new Adaptive Lighting feature, which allows for compatible smart lights to automatically adjust their colour temperature throughout the day to mirror a more natural light spectrum.

HomeKit Secure Video is fast becoming one of the key selling points for Apple's smart home system and, with iOS 14, there is a major update: Face Recognition. This allows compatible video doorbells and security cameras to identify friends and family, and you could even have a HomePod announce who is there (Nest Hello users can already do this with the Hello doorbell and Google Assistant speakers).

tvOS 14, the next-gen software for Apple TV, also has security camera updates through HomeKit; users will be able to access HomeKit-enabled video cameras and accessories by using Siri or Control Center, and also receive doorbell notifications on their TVs, with a live feed explaining who is calling.

The 2020 iOS update also brings expanded controls in Control Centre for quicker access to your HomeKit accessories and scenes. In the Home app itself, you'll also now get a better 'quick view' up the top, telling you things like a door is unlocked or a security system isn't enabled.

As mentioned, iOS 14 (and tvOS 14) is expected to land on people's Apple kit in September.