You can literally stick this battery-powered cam anywhere 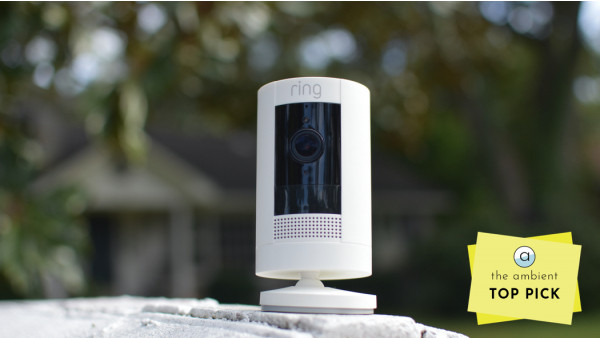 Ring's smart security camera line-up has been expanding like bunnies, with multiple options on the table today.

From the Ethernet-powered Stick Up Cam Elite and the teeny tiny Indoor Cam, to the powerful Floodlight Cam and its less bright sibling the Spotlight Cam, there's a Ring flavor for every scenario.

But the best of the bunch in terms of flexibility, price, and features is the third-generation Ring Stick Up Cam, which is on review here.

Designed to work indoors and out, this $99 security camera comes in three different ŌĆō but almost identical ŌĆō variants; it's just the power method that's the differentiator.

There's a wired cam (powered via Micro USB), a battery-powered version (which we've been testing for this review), and one that runs with an accompanying solar panel.

The last two are identical, you can just choose to buy it with the panel, or without and pick one up later if you find a need.

Price when reviewed
$99
Buy on Amazon

The battery-powered camera space is a crowded field, with the likes of the Arlo, Eufy, Blink and Wyze serving up a wide range of options and prices.

So, where does Ring's third-generation Stick Up Cam fit in, and how good a job does it do in keeping an eye on your home?

We've had one inside and outside and all around about our home for close to a year now, and here's our full Ring Stick Up Cam review.

The third-gen Ring Stick Up Cam retains the design of the second generation iteration; sleek, glossy and cylindrical, as well as compact and with a nice design aesthetic. It's also available in black for a more industrial look.

The biggest change is in price, the second-gen clocked in at $179.99, and this version is just $99. While Ring doesn't advertise the differences, the main change we could see on the hardware front is a slightly smaller field of view (130 degrees as opposed to 150 - you can still get that with the Ring Stick Up Cam Elite if you need wider coverage).

The Stick Up Cam plug-in version also loses the Power over Ethernet ability (again now found only on the Elite), and the flexible mount that gave you the option of hanging the cam from the ceiling is now an optional additional $20 purchase.

However, the included mount is still very versatile and gives you the choice of setting it up on a wall or just popping it on a flat surface.

Power sources include plug in, battery powered, and solar powered, and you get 1080p HD video, motion detection, night vision and two-way talk with any model.

The battery model comes with a quick-release battery pack (the same one across the line) and USB charging cable, and if you opt for this one you can easily add the solar panel later, or even convert it into a plug-in camera by picking up an indoor/outdoor power adapter.

The advantage of this dual power option is that the battery will act as a backup so your camera will keep going even it loses power.

Our favorite feature of the Stick Up Cam is its flexibility. It's compact enough to fit anywhere (just a few inches larger than the teeny Ring Indoor Cam), and it can live indoors or out, thanks to a weather-resistant casing.

And, because it's battery powered, it's easy to just pick up and move around if you're using the flat base. During our testing we moved it to different locations based on need and it was by far the easiest option for that of all the cameras we have on hand for testing.

Installing it on a wall is also simple to do, you just unscrew the base and reattach it to the back of the camera using the same screw, so no need to hunt for a special gadget or device if you want to change the setup. From there, just slide it on to the included wall mount (which sits in the base until needed) then use a couple screws to attach it to your drywall.

The Ring Stick Up Cam has the same specs founds across Ring's wide line-up of cams, including two-way talk, live view, up to 1080p HD video, night vision, a built-in siren, and motion detection and motion-activated recording

We do miss the lack of customizable motion zones that much of the competition offers. You can turn off one of three zones to avoid unnecessary alerts, but that's quite imprecise.

You can, however, add privacy zones to block out areas you don't want to see ever, although in practice these are quite annoying as there's no depth to them, so if you're blocking out something that's far away, it also covers up anything that crosses into the zone that may be closer (like a person walking towards your house).

Other privacy focused features include the option to disable audio recording and a blue LED light that shows you when the device is recording or someone is watching the live view.

You can also use Ring's Modes feature in the app to tell your cameras with one tap when you want them to shut off motion detection and / or live view capabilities - such as when you're home on the couch.

There aren't a lot of the more advanced features here that you find on higher-end cameras. No audio, vehicle, pet or package detection, but there is a People Only Mode, where you only get alerts when the camera spots a human, but it will still record all motion.

Ring's cameras rarely win top marks for top-quality video, they've positioned themselves firmly in the budget security line-up and if you're looking for crystal clear pictures and vivid color you're going to need to pony-up a bit more cash.

In our testing outdoors, the colors were muted and washed out compared to footage from a Nest Outdoor Cam IQ we have installed in a similar spot, and there was a lot of artifact in the outdoor footage.

But the camera costs around $300 less than the top-end Nest Cam (which is mains-powered only), and the video was clear enough to see what was going on. Plus, clarity was a lot better indoors, audio and two-way talk worked very well in both environments, and night vision was excellent.

We also really like that Ring now has the option to extend recording of clips up to 120 seconds, but there's still no option to keep a live view going for more than 10 minutes, and 24/7 continual recording is nowhere to be seen, even on its hard-wired cameras.

Obviously, these features will drain your battery quick smart, but battery life is pretty solid considering the size of the camera. In the year we've been testing it we've recharged on average every 2-3 months (with the camera in a variety of different locations, some higher traffic than others).

On the battery front we love that all Ring's batteries are the same, so if you have a suite of Ring products it's worth picking up a couple extra batteries at $29 a pop to have on hand for easy swapping.

We also love how tightly integrated the cameras are with Amazon Alexa. Ring is owned by Amazon and you can set up lots of options for pairing with the voice assistant through the Alexa App.

Call up footage on any smart display or Fire-TV enabled device, have your speakers announce when motion is detected on one of your cameras, and even use the motion sensor in the device as a trigger for Alexa Routines.

And, as a bonus, all Ring devices just magically appear in the Alexa app, there's no additional setup needed to connect them.

Our biggest complaint with Ring cameras is how long it can take to pull up a live view, but this is because they rely on battery power and they work directly off your Wi-Fi, with no bridge intermediary to help things along.

There's a positive here, in that you don't have to pay for or install a separate bridge/hub, as you do with Eufy and Arlo. But if speed is of the essence Ring may not be the best option for you.

However, if you're looking for a compact, versatile, truly wireless security camera you can use anywhere that won't break the bank, the Ring Stick Up Cam is your best option.

Ring Stick Up Cam Battery-Powered
The Ring Stick Up Cam makes up for good but not great footage with heaps of flexibility, good battery life, and a really great price. It works seamlessly with Alexa, has a top-notch, easy to use app, and really simple installation. For a wire-free camera that you can stick anywhere, indoors or out, this is an excellent option.
PROS
CONS
TAGGED    security cameras    amazon alexa