We pit the tech giants' latest mini speakers against each other 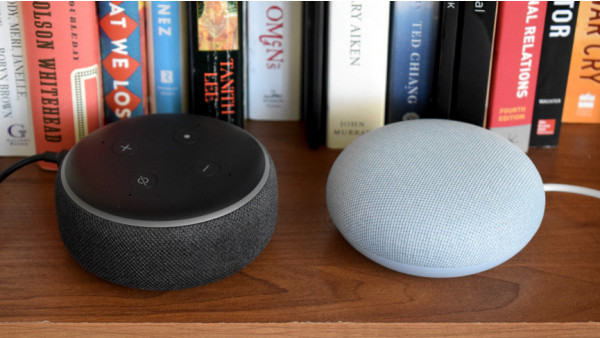 Google and Amazon's mini smart speakers are entry-level products that people can easily set up and use. So cheap, so cheerful, so easy to use - why wouldn't you buy one?

Once you do, both companies are betting on your being hooked and buying further and further into their smart home ecosystem.

So how do you choose? Both mini speakers are low on form-factor and easy on the wallet, but there are some key differences - mainly the flavor of the assistant inside, of course, but a few other things worth noting too.

To help you decide which one's right for you and your home we've run through the differences and similarities between these pint-sized pucks.

Read on for the key points of comparison between the Amazon Echo Dot and Google Nest Mini.

When it comes to design, look and feel these two have a lot in common. Both have mainlined on fabric to slightly differing degrees.

The Nest Mini has an all-over fabric wrap, which has the bonus of being sourced from recyclable materials, so if sustainability is on your radar, that's worth noting. It comes in four colors: black, white, coral and blue, and all are pretty tasteful in their shades.

The fabric hides some LED indicators that act as touch points for some controls - with volume controls on each side, and the central lights letting you pause and play music. The Nest Mini doesn't have an audio-in jack, but does have another unique boast - it mounts to the wall.

The back of the unit has a hook slot for hanging, which is straightforward to use. That said, we're not sure how good the requisite wire trailing down your wall really looks. The speaker itself is 1.65 inches tall and 3.85 inches in diameter.

Moving to the Echo Dot, that fabric focus returns, but doesn't extend to the top of the speaker, which is matte plastic surrounded by Alexa's light ring. On that top, you get four buttons, two for controlling volume, one for muting Alexa and another multipurpose one for other uses. You do get a 3.5mm aux jack, here, too.

The Echo Dot comes in a range of colors: black, gray, white and pink. Again, these are all pretty nice and subtle. The speaker is 3.9 inches in diameter and 1.7 inches tall, all told, so almost identical in size to Google's Nest Mini.

It's worth noting that Amazon's just released a slightly more expensive version of the Echo Dot, the Echo Dot with Clock, in white only, that is identical to the basic version, with the addition of a clock display on the speaker's side. We found it a really useful change, and would call it worth the additional $10 cost.

If you take that plunge, you get that white LED display, which can change to display details other than the time when needed, but otherwise has the same design.

Comparing Amazon and Google's design efforts Google probably edges it, just. Alexa's ring is distinctive, and the Echo's buttons are more functional, but on looks alone the Nest Mini is more elegant and unobtrusive and likely to fit into your interior decor more easily.

The biggest difference between the Amazon Echo Dot and Google Nest Mini, and probably the one that is most likely to determine which one you go for, is the smart assistant.

These are proprietary speakers, so each comes with just the one assistant loaded onto it. No prizes for guessing which, either - Amazon's Alexa on the Echo Dot, and Google Assistant on the Nest Mini.

If you go for the Echo Dot you'll be buying into the Alexa-integrated ecosystem, while the Google Nest Mini offers up the "Works with Google" world. Both have their merits, and both are ever-expanding, so if you've got your eye on any particular tech for your smart home, it's worth checking ahead if they'll work with one or the other - and exactly what that integration can do.

That said, if we're picking a winner in this category, we'd go with Amazon as far as connectivity is concerned - Alexa is still the market leader for compatibility and products. However, in terms of actual use, we just, just prefer the Google Assistant experience - the responses are more natural, and the Assistant is a little bit smarter than Alexa.

Still, though, both are excellent systems. You won't regret either choice, unlike some of the more underpowered other assistants floating around out there.

The good news is that both Amazon and Google concentrated on upgrading the sound of their puck speakers with recent updates - both are significantly better in the audio department than earlier versions.

Amazon's third-generation Echo Dot made major strides over the previous iteration, but you're not getting a full stereo replacement. The Echo Dot has impressive volume for its size, and fidelity in the same bracket, but really isn't going to fill a big room or impress you with its projection.

The bass is lacking, especially at higher volumes, and loud playback can still get a tiny bit tinny. If, though, you're happy to use it for the odd podcast, background tunes or as a speaker in a smaller room, such as your kitchen or bedroom, you're likely to find it fulfills your needs ably.

Turning to the Nest Mini, the picture is much the same. The Nest Mini's new 40mm driver makes it far punchier than the older Google Home Mini, but still leaves it in the same category as the Echo Dot. It's a great solution for easy audio and sound without having to set up a big system, but won't blow anyone's socks off.

Listening to the two speakers side-by-side and comparing them carefully, we think the Echo Dot just edges it, but there's not much in it at all. Although wall-mounting the Google Mini does give it a minor boost. Both speakers can also be paired with a further version of themselves for stereo playback, if you're looking for a bit more oomph.

When it comes to pricing, the unsurprising news is that we get another neck-and-neck race. Amazon and Google are well aware of each other's tactics, and have matched the prices of the Nest Mini and Echo Dot accordingly. They're both $49.99 at full price.

That said, each speaker is also a prime candidate for discounts throughout the year, and for inclusion in promotions and bundles. If you keep an eye out, you're likely to be able to pick up your chosen device for quite a lot less than $50.

Either way, the good news is that you won't be significantly out of pocket if you choose one or the other. The only modifier to that is that Amazon's newer Echo Dot with Clock does cost an extra $10 for the privilege of that clock display.

Amazon Echo Dot vs Google Nest Mini: Which is the best?

It's a pretty tight battle between Google and Amazon for smart home supremacy as far as mini speakers are concerned.

That's good, because competition in this space makes for better prices and features for you, and these two speakers epitomise that process. They're both great improvements on their predecessors, and represent frankly amazing value for the functions they fulfill.

But which should you buy? On balance, that depends on your situation.

Have you got an established smart home, or at least a selection of appliances or lighting that has the option of smart home compatibility? Or, indeed, do you have plans on that front, to build out an ambitious system across multiple brands? If so, it's likely that the Echo Dot is the choice for you, by virtue of Alexa's edge on compatible services and devices. Amazon had a head-start of it's own making in this space, so its Assistant still has the widest adoption.

That said, you could just as easily fall on the other end of the scale. If you're a smart home novice, looking to start small and built outward, the Google Nest Mini is a brilliant choice. It's straightforward, and Google Assistant is constantly improving, to the point where we think it's on the borderline of being the best assistant out there. Of course, if you're already using Google Home, it's a no-brainer, too.

So, there you have it - two excellent smart speakers, both representing good value, but with the choice between them possibly coming down to circumstances, not any huge advantage one holds over the other.