Our top picks of the top digital assistant speakers with touchscreens 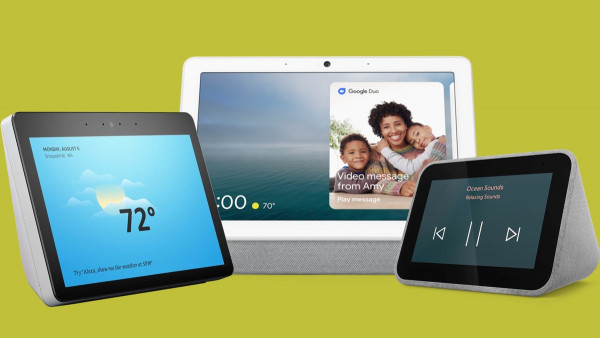 Smart speakers began a voice-controlled revolution, but don't be fooled: the screen is far from dead. Smart speakers with displays are the new trend, and they're only getting better.

Coming in all shapes and sizes with the likes of Amazon Alexa and the Google Assistant built in; the best smart displays range from the glorified docked tablet to retro television sets. The display-based speakers are the ideal gadget to place in your kitchen or hallway.

Why? Well, while they're equally competent as their screen-less counterparts in handling voice commands, you'll also be able to view a feed from your security camera, watch instructional cooking videos or make video calls to friends. Plus, there are those times (like getting movie showtimes or the week's weather forecast) where visual information is just... better.

This is all well and good, obviously, but every smart display offers slightly different specialties - and some are naturally better than others. That's why we're here to give you a snapshot view of the very best on offer in 2020.

And, to be clear, we're including all smart speakers with screens in this list, not just those from the Google Smart Displays range.

Amazon's flagship smart display - and the one that started it all - has been given a serious upgrade over the original generation. Gone is the boxy, plastic design, and in its place comes a refined Show with a fabric exterior and improved smart home powers.

Like the Echo Plus, the Show is able to act as a smart home controller, with the built-in Zigbee chip letting it connect to other devices (such as lights, plugs and cameras) aligned with the wireless protocol - all without the need to plug in yet another hub.

The experience still isn't totally fluid, and trying to figure out which skills are designed to work with the Show is still a hassle, but this is a great device to make the 'main' hub of your smart home. Sound is respectable, the 10.1-inch, 1280 x 800 screen dazzles and, at the end of the day, this is still Alexa running the show.

The speakers also make it a strong music player in larger rooms and the screen is great for TV shows or and there's a camera for video calling.

Also consider: The Show now comes in all shapes and sizes; so - depending on where you're going to put it - you might want to consider either the Echo Show 8 or the Echo Show 5. The clue is in the name for the display size on these Show alternatives.

Aside from the name change, the flagship of Google's Smart Display line is no different now than before; it's small, cheap and essentially just a tablet stuck to speaker to help offer better sound. And it has proven very successful so far, as well as acing our testing.

The 7-inch, 1024 x 600 resolution screen is sharp enough for the all the basic tasks you'll be performing with it, such as listening to Spotify, perusing YouTube, watching videos and checking the weather - and smart home control through the Home View is a cinch, even if it isn't quite as strong as the Zigbee-enabled Echo Show.

There's no camera here, either - the only smart display to omit a front-facing snapper. That sensor you can see above the screen is an ambient EQ light sensor, something that adjusts the screenŌĆÖs vibrancy to match the light of the room its in. The sound is comparable to the Home Mini, only with more bass - you'll have to look elsewhere if you want something with sonic heft of the Google Home Max.

Despite the odd decision to change names, it's hard not to love the Google Nest Hub. It's small ŌĆō perhaps too small for some people ŌĆō but it's the best looking of the Assistant Smart Displays so far. It's also a great showcase for what this category of smart speaker can do, particularly with that ambient EQ sensor ŌĆō and for a fantastic price. But this is a young platform; the Nest Hub needs to do more. In time, it should come.

Also consider: Explore the Nest Home Max, the bigger sibling of Nest Hub that also features a camera and packs in a much meatier audio punch.

One of the first Google-powered Smart Displays to launch, the JBL Link View looks strikingly similar to a TV from the 60s - only, y'know, with a bigger emphasis on sound, with two speakers either side and a passive radiator sitting at the back.

And really, it's the booming sound and built-in Chromecast support that are the high points of the Link View, since the 8-inch screen is tough to view at different angles and unimpressive in resolution when compared to rivals.

If you're looking for the best smart display for sound, and you just want the display part as an added bonus, the Link View has to be a consideration.

The JBL Link View is a visual smart speaker that focuses on great audio ŌĆō and it certainly delivers in that department. It's a deep, rich, bass-heavy sound that makes music and movie trailer listening a treat.

However, its bad viewing angles make for a less wonderful visual experience. Android Things is a good start on a visual Google Assistant, but it still feels undercooked and has a long way to go.

Also consider: If sound is really important to you then, perhaps, you should look at a smart speaker without a display, from the likes of Apple or Sonos.

Lenovo's Smart Clock is the perfect fit for your bedside table. The 80mm x 114mm x 80mm size means it doesn't take up too much room, and the 4-inch, 480 x 800, LCD screen is crisp enough for pretty much everything this clock has to offer.

Running on the same Android Things platform as its sibling Google Assistant Smart Displays, things have been stripped back a touch for the smaller form factor. There's no Home View, for example, the best way to control your home is very much through the voice assistance and not the screen with the Smart Clock.

It also can't play videos from the likes of YouTube, call people on Duo or guide you with recipes, either, though, to us, this actually makes sense; we probably don't need another screen in the bedroom distracting us in the morning and evening

Where it does excel is in the bedroom. The display's brightness will dim and illuminate based on its surroundings, thanks to the ambient light sensor, and you can even tap the top of the device to snooze or stop the alarm in the morning. They're little touches that actually make a big difference to this feeling like a standard alarm clock, and not just a smart display in smaller clothing.

You can also replace your phone's plug and use the clock's built-in USB cable to power your phone. Located on the back, too, is a switch to turn the microphone off and there's no camera to worry about, either. A big plus in the bedroom.

Facebook's first generation Portal (and Portal Plus) came at a terrible time for the company and, by all accounts, sold pretty poorly. And, while we don't yet know how the latest models will perform in the market, we do know that they are pretty solid devices; especially with that WhatsApp integration and enhanced video calling features.

The latest Portal and Portal Mini models have a similar design, but in 10-inch and 8-inch sizes respectively. Both look like a digital photo frame, with a nice sharp 1280 x 800 pixel resolution, and when youŌĆÖre not using the Portal thatŌĆÖs exactly what they'll be, scrolling through stock pictures or your own library of pictures from Facebook and Instagram, if you allow the Portal to have access.

For video calling the speakers are great but for music theyŌĆÖre tinny and less impressive than the Google Nest Hub Max or the Echo Show. Does this matter? Chances are youŌĆÖre buying this because you want a Facebook/WhatsApp calling device and not because you want a new stereo system.

Video calls are helped thanks to the Portals boasting a 114-degree field of view and Facebook's clever tech that keeps you in frame as you move around the room, panning and scanning your position. You can have a maximum of eight participants on Messenger or four on a WhatsApp video call.

Surprisingly, Alexa is on board too. YouŌĆÖll be prompted to connect your Alexa account during the setup process, and once connected youŌĆÖll be able to control your gadgets as you would on an Echo.

Also consider: There are no real rival to the specific USPs of the Portal; but you may want to check out the older Portal Plus, or the TV-accessory Portal TV.

The smart display speakers listed above are our current favorites, but there are also a bunch of other devices you might want to consider.

Lenovo is by far the most prolific player in Google's Smart Display family. Not only is there the Smart Clock we already covered but there's also 7-inch, 8-inch and 10-inch Smart Display models, as well as the 10.2-inch Yoga Smart Tab; an Android tablet that comes with a kickstand and the Assistant built in to answer commands and offer hands-free control.

Lenovo also has the Alexa-flavored Lenovo Smart Tab on offer too; a 2-in-1 Android tablet that also doubles up as an Echo Show Mode smart speaker (pictured above).

Actually, there's two models the P10 and the M10 - with the latter being slightly better thanks to increased storage capacity (64GB as opposed to 32GB), an extra GB of RAM, a dual-glass design, a fingerprint sensor and a couple of extra Dolby Atmos speakers.

LG's effort - the Xboom AI ThinQ WK9 - can probably be ignored unless you manage to find it at a bargain price. It was announced an age ago and has since been well and truly trumped.

Archos' Hello range is also one to, probably, steer clear of; although it is a cheaper option. It comes in three shapes and sizes although the big caveat here is that they are all, essentially, Android tablets baked into smart speaker form factors.

One to definitely keep an eye on though, is the slick looking Royole Mirage. Unveiled in January 2020 at CES, it's an Alexa smart speaker with an 7.8-inch, 1920 x 1440, flexible AMOLED display wrapped around the body.

We've been assured by a Royole spokesperson that it will, indeed, ape Amazon's Show devices. It goes on sale later this year for an eye-watering $899.