Blue's security cameras work with everyone and are available now 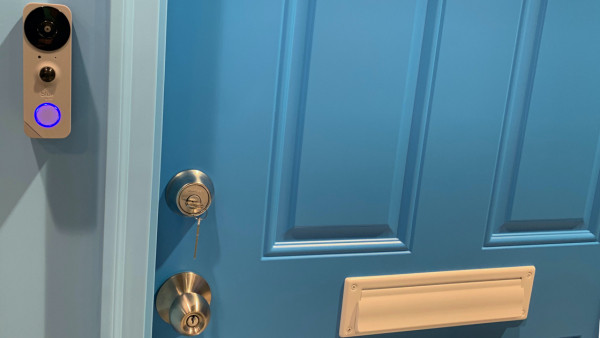 Perhaps the largest home security company in North America ADT has seen the writing on the wall for the professionally installed system, or perhaps ADT is just keen to hop on the exploding bandwagon of the DIY smart home. But whichever cliche fits the launch of Blue, ADT's first DIY smart home security system, it looks like they've done a very good job.

With a long, if slightly checkered history of tying the smart home into home security (ADT introduced the Pulse smart home system in 2010 and recently upgraded it to the Command and Control system), ADT's newest foray into smart home security ticks pretty much all the boxes.

Low prices, fully-featured cameras, compatible with every major smart home protocol, and backed by ADT's professional monitoring service, Blue by ADT is a solid DIY security system and an even more impressive smart home set up.

Our only gripe at this stage is the look: the components are bulky and inelegant, and the "pearl gray" color, while a change from entirely white and black options elsewhere, just doesn't look pretty. A graphite grey, which will presumably be darker, is coming soon.

But when it comes to price and features there's not a lot to complain about: no required monthly fees, no long term contracts and all the smarts of systems that cost a lot more.

The full smart home security set up will roll out this Spring, but at CES this month ADT showed off its three security cameras - a wired doorbell, a wired indoor camera and a battery-powered outdoor camera, each costing $199.99.

Read this: What is ADT's Command and Control smart home system?

60 days of cloud storage is $2.99 a month per camera or $12.99 for unlimited cameras. Or ditch the cloud entirely with the option of local storage using onboard SD cards.

The indoor camera can also listen for smoke alarms and will have Alexa built in. All three cameras can be bought now as stand alone devices, or paired with the BlueŌĆÖs DIY security system.

The system will include a central hub/keypad, door/window sensors, motion sensors and smoke and leak detectors. It can be self-monitored or pay for ADTŌĆÖs professional monitoring for $19.99 a month, with no contract. Pricing for the security components has not been released yet.

Most interestingly from the smart home side of things, Blue will not use ADTŌĆÖs proprietary radio frequency, instead the system's hub will use Bluetooth, Z-Wave, Wi-Fi, cellular and a "Thread or Zigbee radio, we haven't decided which one yet," an ADT spokesperson told The Ambient at CES. Plus, Alexa will be built-in to both the hub and the indoor camera.

The inclusion of Zigbee and Z-Wave means you can connect any compatible locks, sensors, lights and thermostats to round out your smart home set up - although only Blue's components will be part of the monitored security.

Alexa and IFTTT integration are available now, with Google Assistant and HomeKit compatibility coming with the full launch. The cameras are HomeKit-ready, but won't work with HomeKit until the whole system is released.

This move is not a big surprise, ADT purchased the Lifeshield DIY security system early last year and built Blue on its platform (it's backwards compatible with all Lifeshield devices).

But it is an indicator of a seismic shift in the world of home security, one where smart, lifestyle-focused features and flexible systems are quickly replacing security-only solutions and long-term contracts. For the smart home, this can only be a good thing. It's going to be the fastest way to bringing these innovative, exciting smart home solutions to the mainstream.