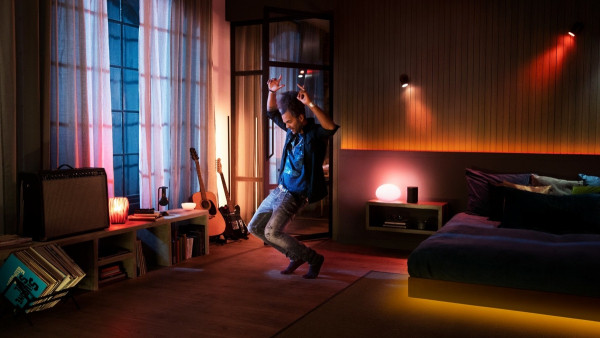 The Ambient is reader-powered. If you click through using links on the site, we may earn an affiliate commission. Learn more
Andrew Williams
@wwwdotandrew
Friday

Signify's Philips Hue has expanded its range of smart lights, but its most interesting new announcement can be used by anyone with a Hue Bridge and a color Hue bulb.

Spotify has partnered with Philips Hue to develop ŌĆ£deep integration of lighting and musicŌĆØ. Bulbs and light strips will pulse in time with the music, and use color shades that fit the track.

This is possible because the Hue app gets access to SpotifyŌĆÖs track metadata, which includes information on a songŌĆÖs tempo, genre, mood and more. ItŌĆÖs the information Spotify uses to help categorise its millions of tracks into endless playlists.

The feature will be part of a new Sync tab in the Philips Hue app, and is already rolling out as part of its early access programme. It will become part of the regular app ŌĆ£after October 2021ŌĆØ.

This is a neat evolution of the light sync feature introduced in 2019 with the Philips Hue Play HDMI Sync Box, which adds Philips Ambilight-style lighting to any TV. But thereŌĆÖs no extra cost involved in this Spotify tie-in.

ThereŌĆÖs also a new version of the Play HDMI Sync Box coming in ŌĆ£fall 2021ŌĆØ. It adds 120Hz support, in-line with the capabilities of the Xbox Series X and Sony PS5 consoles, although only at 1080p and 1440p resolutions. At 4K resolution the box is limited to 60Hz.

The new Philips Hue Play Gradient Light Tube fits into this entertainment side of the Hue line-up well. ItŌĆÖs a follow-up to 2020ŌĆÖs Play Gradient Lightstrip, and offers a solid tube of LED lights rather than a strip youŌĆÖll need to attach to a wall or other surface. Just place it above or below a TV, or wherever you like, and youŌĆÖre done.

Philips Hue has also updated a couple of its lines with Gradient tech. This lets Hue lights display multiple colors at once, rather than cycling through flat tones.

An upgraded version of the popular Gradient Light strip is coming too. The Philips Hue Ambiance Gradient Lightstrip will be able to blend colors across its 1m ($69.99) or 2m ($169.99) length.

Philips Hue lighting is getting more dynamic, and the new version of the Philips Hue App 4 leans into this. It introduces dynamic scenes, which will ŌĆö for example ŌĆō change the character of lighting throughout the day.

There are more conventional changes to the Philips Hue line-up as well. The Philips Hue White, White Ambiance and White and Color Ambiance sets will now be available in 1100 lumen and 1600 lumen variants. ItŌĆÖs a big upgrade from the 800 lumen Hue bulb standard.

Decorative filament Hue bulbs will now come in a White Ambiance flavour. It lets you customize the color temperature rather than being stuck with the very warm white tone typically associated with this kind of style of bulb.

ThereŌĆÖs a new shape of Hue filament coming too, an E14-fit candle, although this does not offer color temperature changes.

Lights for ceilings and bathrooms

WeŌĆÖre not done yet. There are new Philips Hue fixtures for bathrooms and ceiling lights. LetŌĆÖs start with the ceiling fittings.

The Philips Hue Surimu is a recessed white and color ceiling panel available in either a 120x30cm rectangle or a 60x60cm square, both priced at 269.99 Euro. There are no US prices yet.

The Philips Hue Enrave is a classic ceiling light, available as a pendant or a lower-profile design, in four sizes. These use white LEDs. The Philips Hue Infuse adds color, and is available in medium and large sizes.

There are comparable new lights for the bathroom. The Philips Hue Xamento pack offers three recessed spotlights. The Devere is a white LED ceiling light, and thereŌĆÖs also a non-spotlight Xamento series ceiling light that adds color. It comes in medium and large sizes.

Most of the new Philips Hue products will be available from mid-late October in Europe, with a US release planned a few weeks later.