iOS, Android and Fire app launching over the coming month 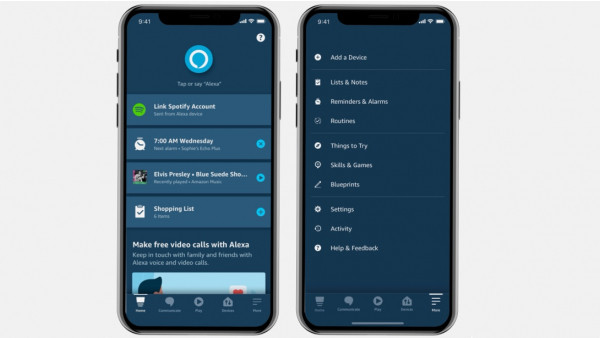 The Alexa app is, let's face it, crap. So we're delighted to report that Amazon is revamping its mobile offering with a heavy emphasis on making the homepage, you know... actually useful.

Currently, the Amazon Alexa app on your phone or tablet pops up with a homepage that offers an array of irrelevant highlighted skills, alongside some random suggestions of what to ask Alexa.

The screenshots Amazon has released of the new app suggest there will still be an element of Amazon suggesting what users should use the voice assistant for, but with a much more in-depth, and useful, emphasis on what users actually engage with.

Think controls for music apps and Echo and Alexa devices, alarms, shopping lists, reminders and so on.

The bottom bar, which loses the Alexa activate button, will include a 'More' option; which replicates what is currently shown when you tap the Advanced icon (currently hidden in the top right corner). This accesses things like Reminders, Routines, Skills and Settings.

The updated Alexa app is rolling out worldwide over the next month for iOS, Android and Fire OS devices.